How To Be A REAL Tough Guy! 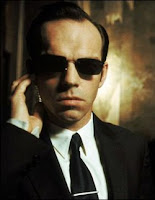 Used to be that when someone wanted to be a Tough Guy they had to actually have some muscles and skill...you know, to chase someone down and stomp a mud hole into them.

Now that you are officially a Tough Guy, you are ready to find yourself an exciting and rewarding career in security enforcement, doing Important things like: chasing away skateboard punks, preventing IT geeks from trying to sneak handtrucks through the lobby, and apprehending old people who attempt to enter the elevator without showing their visitor passes. And most important of all- you get to eyeball all the purty people from behind your dark shades, without them being wise to you.
Posted by Sum Dum Phool at 12:57 PM