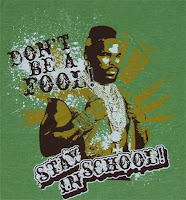 NC Teens get cash to not get pregnant...

"A dollar a day keeps the babies away.

That's the incentive behind College Bound Sisters, a program at the University of North Carolina at Greensboro that aims to keep 12- to 18-year-old girls in school and baby-free.

Girls in the program attend 90-minute meetings every week at which they receive lessons in abstinence and the use of contraceptives — and they receive $7 every week they do not get pregnant. The money is deposited into a fund that's collectible when they enroll in college."

The only problem is that if these girls stay in school and learn some economics, they'll have to weigh the choice of getting $365/year to not get pregnant versus the $90/month or so average child benefit from welfare... and as someone in the article points out- should we pay for every bad behavior someone doesn't engage in? Like pay kids not to smoke pot, get drunk, or steal?

Bribery is so much easier than actually raising kids properly with morals and values...

I don't get it. So "they" hate us (USA that is). They are "resisting" our "occupation". So they murder more of their fellow countrymen in a week than the US Military has killed in a year. In Iraq. In Afghanistan. In Pakistan. In India. In the Phillipines. In Sudan. In Somalia. Etc. Etc. Oh, waitaminit...US troops aren't in the last 5 places I mentioned.

Of course, if they want US troops out, wouldn't it be "smart" to lay low and not attack anyone for a while, so that the world can see there is "peace", and then US troops will pull out, announcing "mission accomplished...uh...again...". Then, with US troops gone, they can go to town- and blow it up.

"Tension" among neighbors... fools who have to get up in the morning for silly nonsense like school and work don't like "noise" after midnight? Obviously, them joooos must be racialists for not being sensitive to other "cultures" and "cultural behavior". Let's throw acid bombs at the jooo kids...that'll help them learn real quick how to respect other "cultures".
Posted by Sum Dum Phool at 8:35 AM