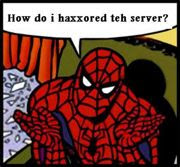 Seems like everyday we hear about some new "cyberattack" on some website or other. Some sites are down for a few hours...some for a few days. But so what? Really... so what? So some turd world script kiddy (jealous that we have clean drinking water and flush toilets) got his bad self a zombie network and ran some DDOS attack against big bad Great Satan. What exactly do these asstards feel that they are accomplishing? Do they truly believe they will somehow bring about the complete collapse of the US "way of life"? So we can't get to the US Treasury website today...like we've been there at all. DDOS attacks don't stop banking. They don't stop email. They don't kill cell phones. And what if they did? Things would be cleared up pretty quickly...and for those of us over 15 years old- the USA got by fine for 200 years without the Internet. So hey- turd world "hax0rs"- put away the silly scripts and toolkits and Google important things, like how to avoid cholera epidemics by not shitting in the same water you drink.

AND WHILE WE'RE ON THE TOPIC OF ATTACKS... 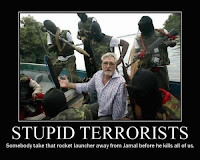 What do muslim terrorists feel that THEY accomplish with terror attacks? So they murdered 3,000 Great Satanists in one day here in the USA. Did the country fall apart and cease to exist, devolving into some quagmire of chaos and anarchy, ripe for take over??? Ummm....no. And the 11,000 or so other attacks by muslims around the world SINCE 9/11/2001 that have murdered thousands of people have also helped accomplish....???
Posted by Sum Dum Phool at 1:46 PM