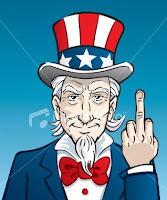 Many times I've seen news articles from outside the USA where people from other countries refer to us here in the USA as "arrogant" and/or "ignorant". The range of non-Americans calling us this is from Francophones to islamic terrorists. They call us ignorant cause we don't speak six languages, like they do. Pardon, my geographically challenged friends- the USA is bordered by two countries. One of which has inhabitants who speak either English or French. The other country is inhabited by people who speak mainly Spanish. So in the USA, the typical language choices in schools are (drumroll please): French or Spanish. The fact that some European country may share borders with countries where a bunch of other languages are spoken is a completely different set of facts compelling language studies.

As for calling us "arrogant"- that's one I just don't get. What do you mean- WE are arrogant? Are you saying that WE are arrogant because YOU believe that WE believe we are better than you? So are you saying that that is wrong, because we are all equals? Yes, I'm sure that's it- you certainly wouldn't believe YOU are somehow better than US...cause then that would make YOU...ummm... arrogant.
Posted by Sum Dum Phool at 1:51 PM