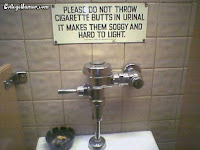 Kid, I've flown from one side of this galaxy to the other. I've seen a lot of strange things floating in urinals. (Not sure what's stranger- the turds or the used condoms in urinals). But I've never seen anything that'll make me believe that hawking loogies into the urinal and not flushing, or splattering whiz all over the floor, is acceptable behavior, by decent, civilized people. My 3 year-old son apparently has better aim than many grown men out there, and he certainly knows to flush when he's done. You nasty, selfish bastards should just be sterilized before you can procreate and perpetuate your selfish worthlessness.

And no- hocking into a garbage can isn't the least bit acceptable either. Especially when you miss.
Posted by Sum Dum Phool at 1:33 PM