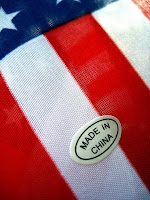 First of all, I didn't DEMAND lower prices, except for obvious rip-offs. I don't deny a man his living, or delude myself into thinking stores can sell merchandise with no profit. But fair is fair. Selling an item for $39.95 that costs $1.57 is nuts. And if I tell the seller that I am not going to buy that item unless the price drops, the seller has a choice: ignore me and hope some other fool buys it, or lower the price to a point where more people will buy, or raise the price and attempt to foist that the item is "elite". Whatever... usually, we like to believe that buyers set the market. If people stop buying an item because it is too expensive, the price will be lowered or the item will no longer be on the market.

The big scam that's been foisted on all of us is that the same high quality item that was too expensive to be made in the USA is now being made elsewhere (most likely China) at a lower cost. Of course, what is actually happening is that a piece of CRAP is being made in China, and being perpetrated on us as a "lower priced" version of the original. And an awful lot of true GARBAGE is being made in China and sold elsewhere. Stuff that is not even functional. I'm not just talking about the famous poisoned items, i.e. pet food, baby formula, toys... I'm talking about regular items that are just so poorly made they aren't worth the plastic and rusty "steel" they're stamped out of. Take this example: the mini-me's decided they need some tools so that, just like Pops, they can pretend to fix things around the house too. So the Mobile Vaginal Life Support Fortress (aka Wife) went to a nearby "Dollar Store" (aka Turd Worlder Owned Funky Smelling House of Overpriced Turd World Refuse To Sell To Stupid Americans) and purchase a couple of "Six Piece Ratcheting Screwdriver" sets. There are 5 driver bits, plus the handle, as shown in the accompanying picture. Only one problem. The bits have a hex shaped SOCKET on their ends opposite the bits (i.e. phillips head). The ratcheting handle ALSO has a hex shaped socket on its end. And there is NO adapter piece of any sort to allow one to plug the bits into the handle and actually use them. And no, it's not a simple matter of the piece being left out of this package. ALL of the packages are the same: SIX PIECE, does indeed mean SIX pieces- 5 bits and the handle. And while the English-as-a-7th-language manager of the "dollar store" truly appeared as amazed as we were, do you think he immediately removed all the stock of these items for return to his supplier? Nope. He told us "you want pick someting else"? Yeah- hand me my 2 dollars back, and I'll use them to pick my teeth. So be ware- if you want a ratcheting screwdriver, just go to K-Mart, err sorry, -Sears-, and buy one.
Posted by Sum Dum Phool at 1:36 PM