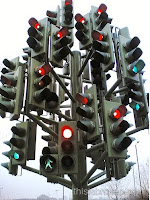 Traffic lights, stop signs, orange cones, "Jersey" barricades... all these devices (as well as the laws regarding their obeisance) are ostensibly put in place to serve one purpose and one purpose ONLY. Regardless of what Sheriff Taylor over in Buddfugg County thinks, they are not revenue generators. They are for the purpose of safety. That's it. Traffic control laws and devices are supposed to be in place to keep people safe. And in order to legally drive in this country, one must pass both a written and physical driving test, demonstrating knowledge of what such devices and laws mean...i.e. if you don't know what the 8 sided red sign with the word "STOP" in the middle is for, you shouldn't be driving. You probably shouldn't be allowed out in public either.

So why does it seem like so many people have no clue whatsoever as to what a blinking red light means? Every morning while I await my bus, I observe the nearby intersection, with it's 4 way blinking red lights (the lights resume normal cycles at 6AM). And everyday I see not only stupid assholes (including school buses and oil tanker trucks) who fly through the intersection without even slowing down, but I also see the truly selfish ignorant assdrippings who drive on the shoulder to go around the silly fool who has actually stopped to obey the red light. I am awaiting the day, which I know is coming soon, where a tanker trunk and church van full of nuns have their fateful meet at that intersection. If I had a fully charged phaser bank at my disposal, that intersection would be littered with flaming remains of these selfish miscreants. Of course, if I had a phaser bank at my disposal, and used it to dispatch all the selfish, lazy, mean ignoramuses, the world would be a hell of a lot less populous.

Now what we really need to do is ramp up 'Green production.
Posted by Sum Dum Phool at 9:24 AM