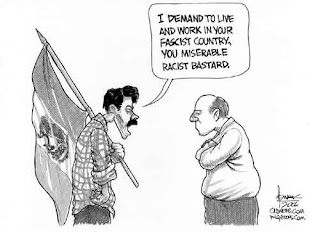 "The five students -- ... -- were then told they must turn their T-shirts inside-out or be sent home, though it would not be considered a suspension. Rodriguez [the assistant principal] told the students he did not want any fights to break out between Mexican-American students celebrating their heritage and those wearing American flags."

"More than 100 students were spotted wearing the colors of the Mexican flag -- red, white and green -- as they left school, including some who had the flag painted on their faces or arms"

"Freshman Laura Ponce, who had a Mexican flag painted on her face and chest, told the Morgan Hill Times that Cinco de Mayo is the "only day" Mexican-American students can show their national pride."

National pride huh? How is it national pride to celebrate the holiday of a foreign country's independance after you have CHOSEN to leave that country and move to the U.S.A.? Once you CHOOSE to move to the U.S.A., whether legally or not, you are no longer of that nationallity. You are not Polish, Russian, Italian, French, or whatever. You have chosen to become U.S. American. You are still obviously a specific race or ethnicity (i.e. Hispanic or Black etc.). I mean, think about why- why would you be "proud" to celibrate that you were born in some shithole?

No offense intended- but you obviously came to the USA cause it's better than what you left. Otherwise, why did you come? Are you just dumb or something?
Posted by Sum Dum Phool at 1:27 PM